Just so you know, We may earn money or products from the companies mentioned in this post. We have a full affiliate disclosure that you can find under here 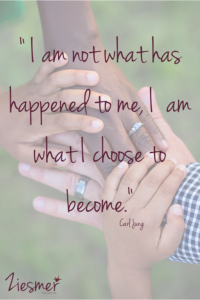 many European Americans, I never thought about cultural identity. In fact, I didn’t even realize I had one until I started working with a very diverse team of employees. In the mid 1990’s our organization sponsored a required training called “White Privilege”. The presenters were very confrontational and I considered them to be almost abusive to the white people in the room. I pretty much shut down about two hours into the eight hour training. At that time I was still in denial that I had any kind of culture to really talk about. Truthfully I couldn’t see why it mattered what ethnicity I was or where my grandparents came from.

My own cultural identity journey

It has been a journey of revelation for me as I have grown and learned more about myself. I have attended various trainings and  presentations along with listening to many speakers over the years. Much of what I have learned about my own culture I have learned from the experiences of others who do not share the same privileges as I do. To work in a diverse environment with many different cultures and ethnicities has been a joy. It has also brought many tears. Together we learn how to get along and how to model appropriate conflict resolution skills to the communities we serve.

I believe my biggest challenge has been in learning about the past of my family and seeing the value in that. Both of my grandmothers died before I was born. I never really cared to learn about them, nor did I care to learn anything about any of my ancestors before them. There still is no burning desire in me to learn these things. However, I do see and now accept the fact that they are a part of why I do some of the things I do and why I sometimes act the way I act.

I have come to understand the cultural aspects that are handed down through the generations in a family. It makes sense to me to know that the “protestant work ethic” was something that my grandparents and their parents before them handed down to me through generations of examples. As a result I believe in working hard to get ahead.

How do children learn about cultural identity?

I believe that families are the main component to a child’s cultural identity. I also believe that society plays a large role in their development too. When children only see the dominant culture depicted in the media as being good, beautiful, strong or wealthy, they believe it to be true. Regardless of what ethnicity or culture a child comes from, their cultural identity is based on whet they see. Mostly, what they see played out in movies, books and especially television news programs. One example would be the way young black men are associated with gangs, drugs, and gun violence.

As an educator, I want to be sensitive to all the cultures I am serving. As our society gets more and more diverse it is important to me to make sure that  curriculum, activities and especially  assessment tools remain culturally relevant to the populations being served. It is important to  give all children a chance to grow and thrive educationally, socially and spiritually. 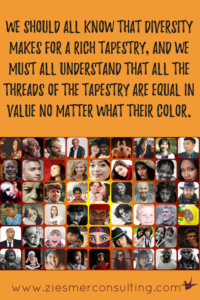 om us. This is one way of infusing positive feelings and goals into the community as they begin their climb up the educational ladder. My sincere hope is that in some small way I am empowering the children and Teachers to stand up for themselves and their cultures in the school realm. Just as I hope to empower parents to appropriately advocate for their child in the school setting.

Check out this page to read more.

Enter your email address to subscribe to this blog and receive notifications of new posts by email!

Find me on Sassy Direct!

Ziesmer Consulting understands that the role of a consultant is to reach back and extend a hand to help those behind them.   I share my knowledge and skills in many areas. These may include diversity, …