Just so you know, We may earn money or products from the companies mentioned in this post. We have a full affiliate disclosure that you can find under here

I often get asked why helping young children form healthy gender identity is important. Parents want reassurance that they are not harming their children by allowing their sons to wear flowers, dresses and the color pink or if they let their precious little girls be strong and climb the monkey bars. 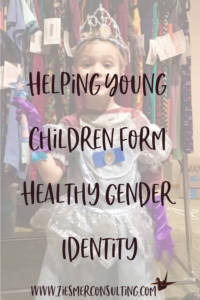 Michael and his Dad

It was late Fall and as I sat in my office a young father stopped in to visit. He said- “Deby, I am really trying hard to stay calm and accept that this is normal behavior, but when I left two weeks ago for my fall business travels, Michael was wearing pants and ever since I came home last week all he has wanted was to wear that red frilly dress! What do I do?”
I smiled gently and calmly explained that Michael spent a good portion of his day in front of the mirror twirling. He loved the way the skirt poufed out when he twirled, he loved the soft silkiness of the fabric and could often be seen rubbing the fabric between his fingers at group time or nap time and red is his current favorite color. I promised that eventually Michael would forget about the red dress and move on to something else. I praised him for giving his son the most important thing a parent could give- the chance to explore and practice life in a variety of ways. Even when it made him uncomfortable.

When do children begin to learn about gender identity?

A child’s gender identity begins to form at a very young age. By the time they are three years old they can usually identify as a boy or a girl, however they don’t really know what that means yet. They are still learning to sort out the differences between boys and girls and men and women. The attitudes of parents and caregivers are very influential in how a child’s gender identity gets formed. These attitudes lay the foundation for a gender identity that will accompany them for the rest of their lives.
The way a parent or caregiver responds to a little boy wearing a dress can greatly influence them. It will also impact the other children as well.  Sometimes, our own bias gets in the way and we have a difficult time allowing a little boy to wear the dresses in the dress up area. We should remind ourselves that little boys want to emulate their Mothers. We need to  understand that allowing both boys and girls to explore is important. Giving children the freedom to figure out what they like and don’t like without placing our own expectations is critical to avoiding gender bias.

Things to do more of:

So what can we do? How do we help children develop a healthy attitude about gender, for themselves and their peers? There are things we can do and things we can avoid that will help. They include
Once we begin to allow our little boys to practice being caring and loving in the house area or allow them to explore the different fabrics for sensory. Once we give our girls the same opportunity to be leaders and make decisions, that is when we will begin to see true empowerment in our society.
To learn more follow me on Facebook
Find my most popular post here

Enter your email address to subscribe to this blog and receive notifications of new posts by email!

Find me on Sassy Direct!

Ziesmer Consulting understands that the role of a consultant is to reach back and extend a hand to help those behind them.   I share my knowledge and skills in many areas. These may include diversity, …